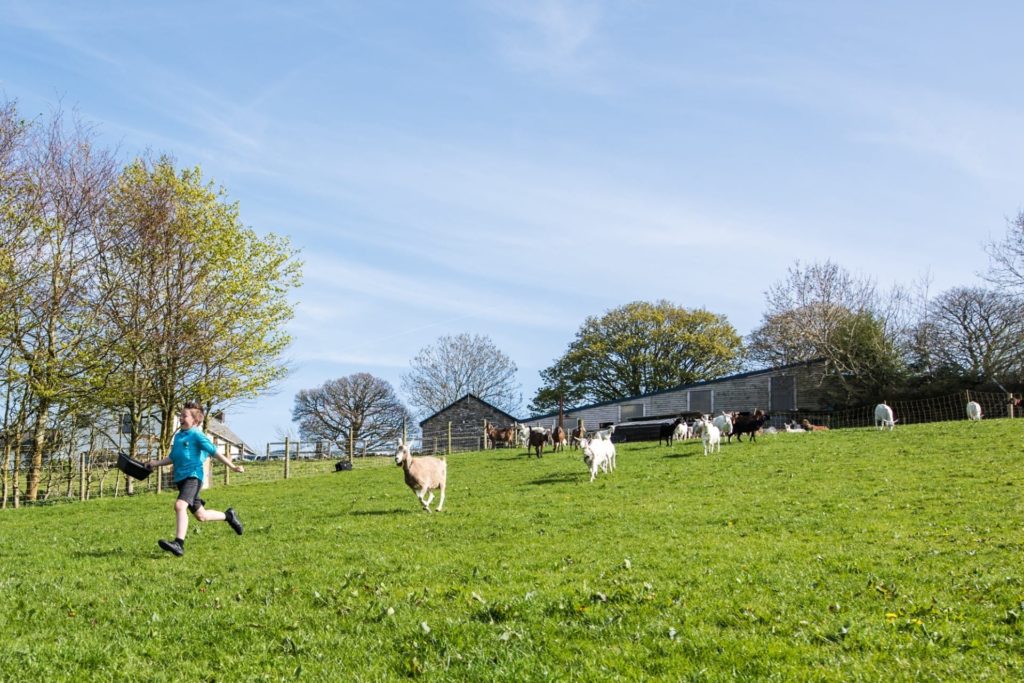 For us, it all started with a goat named Buddug…

In 2010 our little boy Benji, age 5, was suffering from recurrent bronchial infections. Every time he caught a cold it went straight to his chest, ending in a frightening heavy cough that required antibiotics. We went to the GP 4 times in 3 months, and Benji seemed worse each time. It was clear that his situation was deteriorating, and the antibiotics were only making things worse. I ask Rich what we should do.

Because I trusted him implicitly, we did — even though I thought he was crazy and I couldn’t see how owning a goat could possibly help Benji’s bronchial problems. But it seems that in the Welsh farming tradition,”it is known” that goat’s milk is good for asthma, eczema and bronchial infections.

Fine. So we would get a goat. I’d been married to Rich long enough by now to know that he is – annoyingly – almost always right.

We drove straight from the doctors surgery to see “a man who had a goat.” There we purchased the lovely Buddug, a black and white Anglo Nubian goat with long ears and seductive Cleopatra eyes.

There was also a little black kid there that I immediately took a shine to, with long eyelashes and the longer showgirl legs. I immediately dub her Lola, and begged Rich to take her home as well. Lola was still nursing…so we have to have her mother, Nessa, as well. And Lola also had a twin brother, who apparently couldn’t be left behind, so we went home with four goats, instead of one.

I immediately set out the learn how to milk a goat. It was hard as hell. I cried every night.

But I finally cracked the goat-milking process, and give Benji some goats milk to drink. He liked it. Thank goodness.

Buddug then produced so much milk that very soon, we had too much of it. I felt guilty every time I opened the fridge and saw all the unused milk going off.

I did some research and turned up a place called Soap School, where I could learn to make natural goats milk soap and skin lotion. I found this prospect more interesting than trying to make goat cheese – because let’s face it, everyone and his brother already makes goat cheese.

So I went to Yorkshire on the train, and learned how to make goats milk soap and lotion. It was lovely stuff, and all the mums on the school run begged me to make some for their children as well, as it was good for eczema.

But making the skincare didn’t really use up that much milk – I still had loads of milk going off in the fridge. What to do with the rest?

In November 2011, my friend Sue phoned me excitedly and told me to turn on the radio, as a doctor was on, discussing goats milk.

I tuned into the Food Show on Radio 4 and heard a Russian doctor named Dr. Natasha Campbell-McBride explaining that she recommended something called kefir for her patients who suffered from ADHD, autism depression, schizophrenia, dyspraxia. IBS and intestinal disorders.

Dr. Campbell-McBride knew about kefir because she was originally from Russia, where it is of course consumed on a daily basis. She had developed the GAPS diet (Gut and Psychology Syndrome) to help her own son, who was born with autism. She had succeeded in taking her son off the autistic spectrum, and had created the diet protocol to help others with the same issues.

I had never heard of kefir before, and was immediately intrigued.

It occurred to me that if kefir was beneficial for the parents of autistic children, this might be an idea to use up our surplus goats milk. The one thing I know for a fact about the parents of autistic children is that they are super busy! And so if they didn’t have time to actually make the kefir themselves, it might help them, and be a market for us as well. Perfect!

We contacted Dr. Natasha Campbell McBride, and asked her advice on how to make the kefir properly, in a way that she would feel comfortable recommending to our clients. She suggested leaving it unflavored, not use any sugar, which would harm the microbiome, and using real grains, rather than powdered sachets.

We start making kefir in the little stone outbuilding on our family farm in southwest Wales, using the milk from our own goats. At the time, almost no one had heard of kefir, and it was a struggle to get people interested! The kefir was strong and fizzy, and as we left it unflavored, people had to be convinced of the medical benefits before they were willing to take a course.